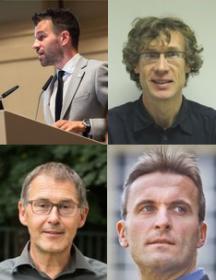 We show that in the current macroeconomic environment, in which nominal interest rates are expected to remain below the sum of real GDP growth and inflation for some time, the rise in government debt due to the Covid-19 recession and fiscal policy responses is feasible without ever having to raise taxes. Specifically, a rise in public debt due to a temporal increase in the deficit automatically vanishes over time. Even when Covid-19 leads to a permanent rise in the government deficit, a permanent (moderate) decline in real GDP growth and persistent (moderate) deflation, the debt-to-GDP ratio will stabilize in the long run without a later increase in taxes, even though the level of stabilization will be at a higher level. Our purpose is not to argue for more public debt and an unlimited stimulus, since interest rates may not be lower forever, but to have a richer discussion of the fiscal policy response to the crisis than is currently the case.